EnBlogue – What is New and Interesting in Web 2.0 ?

The success of the Web 2.0 has drastically changed the way information is generated on the Web, with millions of users actively contributing content in form of blog entries or micro-news (e.g., Twitter). In order to maintain an over- view of this continuously fl owing stream of information, we need methods that extract the essence of current events and display them in a suitable way to users.

With enBlogue, the Max Planck Institute has developed an approach which continuously scans Web 2.0 streams for interesting events, which have received attention in blogs, Twitter, or other media. The name enBlogue is supposed to sound like “in vogue”, meaning it is popular.

EnBlogue processes web contents, annotated with the time of creation and semantic notes to detect surprising changes in the behavior of topics, which can be interpreted as interesting events. Not only individual semantic annotations (so-called tags) are assessed for their popularity, but all correlations between different tags are considered. Two tags are strongly correlated if the relative number of documents that report about two tags at the same time is high. Therefore, the dynamic increase in correlations is particularly interesting.

For example, normally the tags “Iceland” and “flight operation” are not very strongly correlated. This changed abruptly with the vulcanic eruption of Eyjafjallajokull in the spring of 2010. 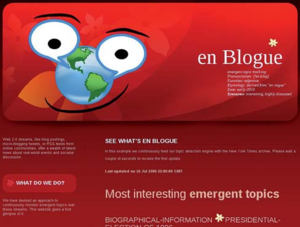 The choice of tags to be considered is a priori unlimited but is primarily based on annotations generated by users, for example, when commenting on a blog entry or a news paper article. Methods can also be used for classifying information into topic areas as well as for dis- covering names of persons or places. The enBlogue system then also enables a mixture of peoples, places, and regular topics.

A model that takes into account the quantity of change as well as time-lines is used to extract interesting emergent topics and to present them in a clear and user-friendly manner.

EnBlogue is the starting point to current information on the web and it helps users being linked to actual con- tents. Personalization, i.e., re-ranking of topics depending on user preferences and interests, and additionally also considering the locations of events and users (if this information is available), is currently being researched. 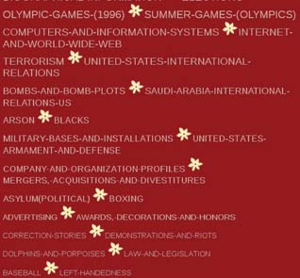 Events identified by enBlogue on July 8, 1996 (with the assistance of the New York Times Archives)