Proteins are biological molecules that facilitate life’s processes: They translate hereditary information, encoded in the DNA, into one or more specific functional roles in the organism. They can do so because they are made up of a chain of amino acids that fold into a complicated three-dimensional structure, thus translating information from 1D to 3D. The specific way in which each protein folds depends on the physical and chemical properties of the amino acids that comprise it. Structural biology has accumulated extensive data on protein 3D structures that can be analyzed using computational methods. If we extend the analogy described above to mechanisms, a single protein is not a machine, but a part of the conveyor belt that performs an individual action towards a common goal. That is why proteins, on many occasions, assemble into complexes to perform their task. These complexes can be a hundred times larger than a single protein. The prediction and analysis of properties of protein complexes is one of the major tasks in structural bioinformatics.

Viruses invade cells of higher organisms and use them to replicate and multiply. They are small systems, typically containing 10-20 types of proteins. Using this limited toolkit, they engage in a complex network of interactions with the host cell and recruit host cell proteins to replicate. Viral mechanisms to copy their gnomes are prone to error, creating variation, which allows viruses to escape very quickly from the persistent evolutionary pressure posed by the host immune system and drug treatment. The amount of data on the variations of protein sequences in viruses, which are available from labs and clinics, is impressive. This information makes viral systems a unique target for bioinformatics studies. Protein sequences from virus strains isolated from various patients provide valuable information for patient treatment, as demonstrated by the geno2pheno approach pioneered at our institute (see “Bioinformatical Support for HIV Therapy” by Thomas Lengauer). Including structural information in this analysis allows us to understand how the variations of the sequences impact the function of the protein and its interactions with partners. For example, one mutation in the protein’s active site can ruin the protein’s catalytic ability, whereas a different mutation nearby will merely diminish the protein’s affinity to an inhibitor. A mutation that is located on an interaction interface with a host factor may prohibit the binding of the viral protein to its cellular binding partner, and the mutated virus will not replicate.

An integrated analysis of sequences and structures of viral proteins

In our work, we put sequences of viral proteins into structural context, and vice versa. We extract sequence features characteristic of viruses with specific properties (e.g., drug resistance) and analyze structures of the corresponding proteins to understand the mechanism. We have performed an analysis of HIV viruses that selectively bind to one of the two proteins (CCR5 or CXCR4) on the surface of the human immune cell, which the virus has to invade for replication. We modeled both viral and cellular proteins involved and concluded that electrostatic charge plays a pivotal role in this interaction. The charge is likely to be conferred by the posttranslational glycosylation of the viral envelope protein (attaching a sugar molecule to the protein after it has been manufactured by the host cell), which in turn has major implications for vaccine development. 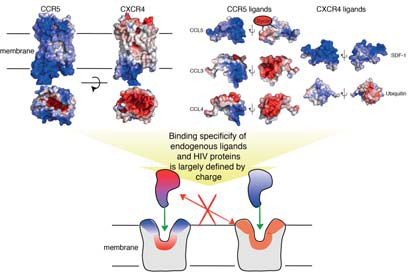 Using the wealth of data on HIV resistance, we have developed a method for the computational assessment of the binding strength between the HIV protease from different virus strains and its inhibitors (drugs that bind to the protein to block viral replication), which has the potential of substantially assisting the drug development process.