Epigenetics is a research area which is at the center of worldwide attention today. The reason is that after sequencing of the human genome just over 10 years ago, it became clear quite quickly that the central aspect of cell regulation cannot be inferred directly from the genomic DNA,since all cells in an organism harbor the same genome. Cell regulation comprises specifically those aspects which are different in different tissues, in which healthy cells are different from diseased cells, and which implement central biological processes such as the cellular response to stress and the process of aging. These aspects of cell regulation are implemented via the dynamic organization of the genome in the cell nucleus which, in turn, is based on chemical modifications of the genomic DNA and of the protein scaffold that envelops it. With techniques of molecular biology that have been developed in the last two decades, such modifications can be measured genome-wide. As a result, their entirety, the epigenome, can be charted.

Whereas each individual has only a single genome, each of us has many epigenomes. In principle all of the around 200 tissue types in the human organism are characterized by different epigenomes. Furthermore, the epigenomes of healthy cells differ from those of diseased cells. The knowledge of the epigenome is a prerequisite of the understanding of the cellregulatory processes in the corresponding cell type. For this reason, several years ago an international federation of scientists known as the International Human Epigenome Consortium (IHEC) was founded with the goal of charting at least 1000 epigenomes of human cells within the next five years. 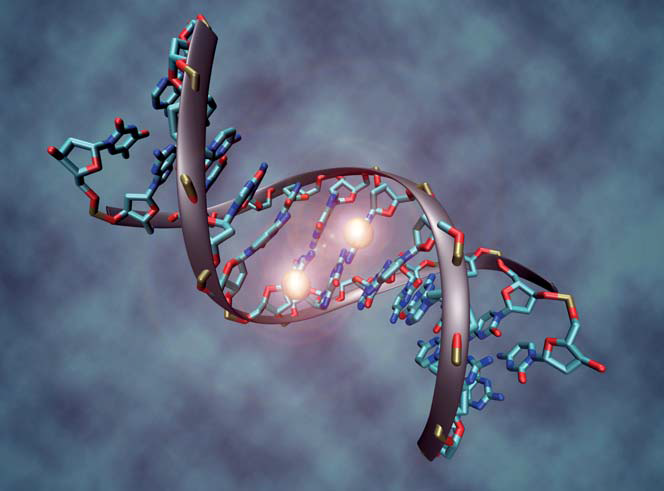 The methylation of the DNA impacts its accessibility by the transcription machinery of the cell.

The Max Planck Institute for Informatics contributes to IHEC in two ways. First, it is a partner in the BLUEPRINT project of the EU, which represents the European contribution to IHEC. This project with an EU funding volume of 30 million euros, the largest that ever went to a single project in the area of biology, is targeted at charting one hundred epigenomes of cells of the bloodline (haematopoietic cells), of healthy as well as diseased (mostly malignant) cells.

Second, the Institute is a partner in the German Epigenome Program (Deutsches Epigenom Programm, DEEP). This project, which is funded by the German Science Ministry with about 20 million euros comprises the German contribution to IHEC. Within DEEP, metabolic and immunologic diseases in particular are investigated, and another 70 epigenomes are charted. The Max Planck Institute for Informatics coordinates the bioinformatics part of DEEP.