Networks, where nodes represent individuals or groups, and edges the connections between them, have become the premier mathematical structure for modeling disease transmission because they capture the heterogeneity of human contacts. The structure of the network powerfully infl uences disease spread. Different network structures can be used, depending on the specifi cs of the disease under consideration. The small world is one common model of social contact. This portrays society as a collection of small groups whose members are in close contact, united by nodes called bridges, which connect groups. The key to preventing disease fl ow in such networks lies in identifying the bridges along which the disease passes from group to group. We have found that a simple morphological measure, the K-shell, identifi es bridge nodes critical to disease fl ow in small world networks. Our work has further shown that interventions such as vaccinations which target these nodes can effi ciently slow or stop the disease from spreading through the whole network. For example, if public facilities such as schools and playgrounds are modeled as nodes in such a network, the method could identify which facilities would need to be closed to halt the spread of an outbreak.

A second common model is the scale-free network. This model emphasizes that a few nodes have a large number of connections, while most nodes are peripheral, having only a few connections. Most new or emerging diseases enter networks from this periphery. We have pioneered a metric of how easily an individual node can spread an infection to the rest of the network, based on its local contact structure. Informally, our results show that a node’s spreading power is not based on how many connections it has, but rather on how many connections its contacts have. 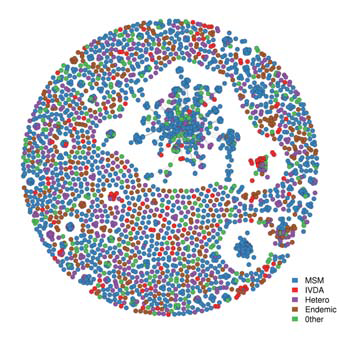 Genetic sequence similarity of HIV-1 samples from patients in North Rhine Westphalia indicates several large clusters, which implies that the epidemic has strong endogenous roots in the region and remains an important concern to public health.

The past five years have seen a growing application of phylodynamics to understand the spread of HIV. Our August 2012 publication in Medical Microbiology and Immunology, “Endogenous or Exogenous Spreading of HIV-1 in North Rhine-Westphalia, Germany”, showed that the HIV epidemic has strong endogenous roots in that region. We are currently reconstructing transmission clusters using data from the EURESIST consortium. This data has substantial coverage across Europe, making this the largest pan-European study till date. Preliminary results show evidence for low geographic mixing and small intertransmission intervals.

Deep sequencing technologies give us the ability to inspect the entire viral population circulating in a patient. Often, the data includes multiple time points. This opens unprecedented opportunities to understand intra-host viral evolution. The structure of the data, however, violates many of the base assumptions of traditional phylogenetic methods. We are actively developing appropriate tools, with application to the evolution of drug resistance in HCV.

Phylogenetic methods have applications far beyond understanding rapidly evolving pathogens; they are applied in all aspects of biology. Yet the methods and tools available are still in their infancy. Those which handle large data sets must ignore important subtleties. Bayesian methods address these subtleties, but can only handle small data sets. A hybrid Bayesian/Maximum Likelihood approach, which we are developing, may allow rapid Bayesian estimation of large phylogenies.